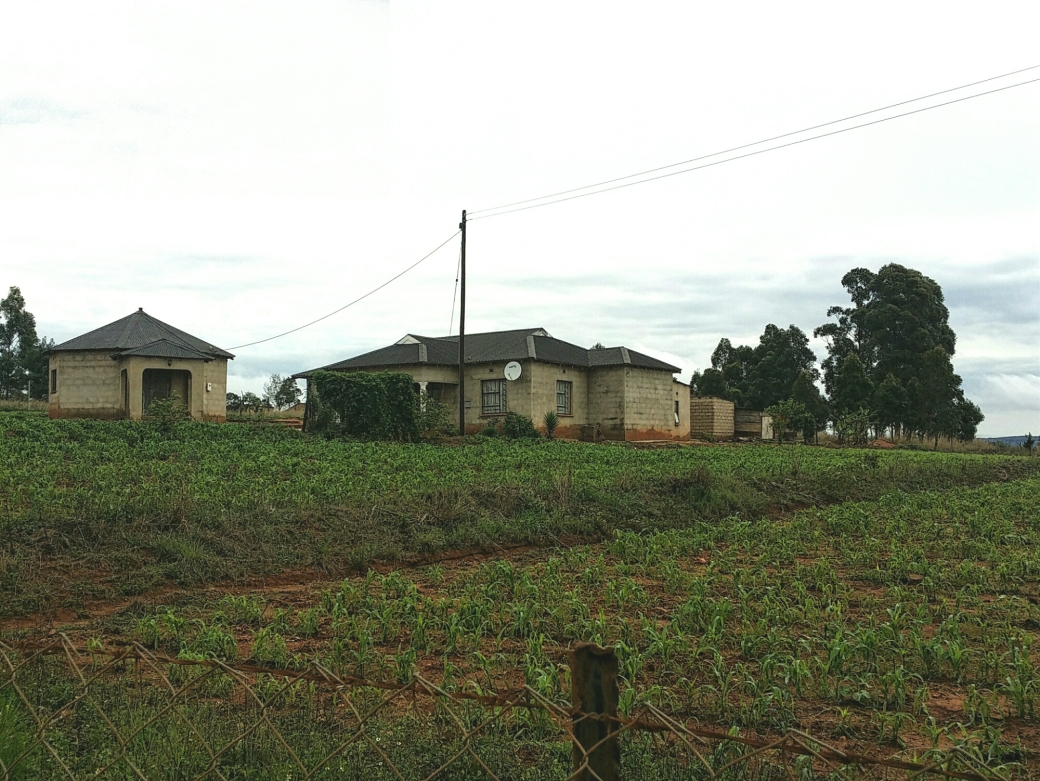 In Swaziland, we live with a host family in a rural community for the duration of our service. These communities tend to be very family oriented. Families live together on a plot of land called a homestead. Homesteads vary greatly in size, structures, and composition. There are some common elements with all homesteads around the country.

I have yet to see a homestead that doesn’t have a farming space to grow crops, typically maize. Most homesteads have multiple buildings on them. On my homestead (pictured above), there’s the main house, my house, a tool house, a chicken house, a guest room, and a pit latrine. Many homesteads also have a kraal (pronounced crawl), which is where the family’s cows live. Some homesteads with many extended family members may have one house for school age female children, and another house for school age male children. Some homesteads have a kitchen house, where food is cooked in a large three legged pot over an open fire.

There is, of course, a process to acquiring land to build your homestead. It starts with going to the inner council at the umphakatsi (pronounced om-pa-got-see) to ask for land to build your home. The umphakatsi is the local governance structure of a chiefdom. In many rural communities and chiefdoms, only a married man can ask the inner council for land to build a home. It’s expected that you give a number of cows to the umphakatsi for the land you are given. Once the land for your homestead is acquired, you can start building whatever structures you’ll need. I’ve noticed that building homes tends to be a local community and family effort.

So, I’ve mentioned these before. A fat cake is a fried ball of sugary dough. While it definitely isn’t the standard of nutritious meals, it is delicious.

Within a month of arriving in Swaziland, I was introduced to fat cakes. Bomake (pronounced boe-mah-gay), or women sell them at the markets, schools, and road side stands. After having several magnificent fat cake experiences and seeing the recipe in our Peace Corps cookbook, I decided that I would try to make them myself.

Here’s the recipe, as written in the cook book:

I should probably say that I took a few culinary, creative liberties. Of note, I did not use measuring cups. While mixing, I just added more wet or dry ingredient until the mixture was a consistency between that of pancake batter and bread dough. I also did not have cardamom. It wasn’t in my budget, and it’s not that serious. Instead, I added a generous amount of imitation vanilla extract. When the dough was ready, I heated up my makeshift deep fryer (a pot filled with cooking oil). I scooped out a oversized spoonful, and dipped the spoon in the oil. The deep fried goodness was almost ready for enjoyment. After I removed the cooked fat cakes from the hot oil, I let them rest and cool for a minute or two. The last step is perhaps the most important. I poured some powdered sugar (known as icing sugar here in Swaziland) in a plastic bag, and added the freshly fried (still warm) fat cakes. A vigorous shake ensures that the fat cakes are nicely covered. They are now ready to enjoy! Try out the recipe, and let me know how it goes.

When a cow, or inkhomo (pronounced inn-co-moe), is slaughtered, there is a lot of meat. The meaty goodness is a carnivore’s dream. After everyone has had some meat, rice or porridge, and cabbage, bobabe (pronounced bo-bah-bay), or men, gather around dishes filled with more meat.

This past weekend when this happened, one of the men invited me to join them as they prepared to eat from the meat filled dishes. On these dishes was something of a Swazi delicacy. It was the cow’s head. The picture above is only half of the cow head meat.

I had heard stories about the sacredness of the  cow head, how delicious it was, and how women are discouraged from consuming it. According to some beliefs, fertility problems might come to women who eat the cow’s head. I’ve also been told that eating cow head meat increases intelligence and virility in men.

I sat down with the men and we started to eat. There were no plates, no cutlery, and no napkins. There was a beautiful sense of community as we ate or half of the cow’s head. It I couldn’t tell you if I ate the cheek, tongue, neck, or other part of the cow head. I can guess that most of the meat was grilled, while some was boiled. What I can tell you (with certainty) is that whatever I ate, it was delicious. It was juicy and full of flavor. The cow head is probably the most flavorful and tender meat I’ve tasted since arriving in Swaziland. It did have a slight garlicky aftertaste, but it was nothing compared to the deliciousness.

There are certainly some things that definitely remind me of home here. There are some gender roles and expectations that I’ve seen before.

Typically, I am not involved in the cooking process. I suspect that this is because I am a man. Women and children, usually girls, prepare and serve meals. Here, at my training home site, my sikhoni takes the lead on most of the cooking. This past weekend, she sent in one of the children with sour porridge for breakfast. This was followed by an egg scramble and porridge some hours later for lunch.

As I was doing my laundry this past weekend, I was nudged to give it to one of the children for them to do it. I resisted the temptation. I decided that it would be best for me to learn hand washing, and perfect my technique. There was a compromise that I would let one of the children assist me. I was very thankful because laundry takes much more time and energy than it ever did in DC. After completing my laundry, I asked one of the children if there was a nap culture in Swaziland. With a confused look, he asked what a nap was. I explained that it was a period of rest in the middle of the day. He promptly replied that they don’t do that. I told them that I would sleep for one hour, and then come back out to continue the day.

While patriarchy is prevalent in both the United States and Swaziland, I can see that it certainly more pronounced here.

This just reminds me of the idea that we are more the same than we are different. Babe (pronounced bah-bay), or father Sheba is one of the training staff in PC Swaziland. He has said several times that we are all going to the same place. It’s just that some of us get there before others. I believe this to be true. It’s all same same, but different.

I feel the presence of my aunt Nae when I’m at home with my make. We often sit in make’s house and watch the news (in sis-Swati). Whenever King Mswati III is discussed and/or appears on television, she speaks of him very highly. She sounds like a mother who is proud of her son’s accomplishments. This is super similar to some weekday evenings spent with Aunt Nae watching the evening news. Aunt Nae’s version of King Mswati III is President Obama. She absolutely loves him. (Side note: if this post ever makes it to Mr. President, she would love a visit from you – and it doesn’t matter if you’re still in office)

It’s quite often that I feel that the Swazi people have accepted me as one of their own. One evening, while showing my training host family pictures of my family in America, my bhuti looks at my Uncle Pat and says that there is no way that Pat could be in America because he saw him last week in Matsapha (a town in Swaziland). I laughed. Though, it is completely possible that my uncle could just show up.